Projects:
Sun Rising in Spring – Won us our first competition abroad. [Coral Springs Fl., 2005]
Negros con Alas – Was awarded some kind of city recognition for beautifying the city. We also won an institutional honorable mention in 2007 for the use of Ceramic Tiles of Italy in our mosaics. In 2008 we won an “arte vivo” award for our general work in art in PR. [Caguas, PR, 2006]
Echoes of Ages – An international competition we won and our biggest recognition so far. [Taipei, 2009]
Entre las 8 – Won a community award for working with kids and community leaders. [Santurce, PR, 2011]
Transmutation – A concrete sculpture with mosaic won us a competition in Gainesville. [Fl. in 2012]

What opportunities and objectives do you achieve through mosaics to appeal or impact not only the artistic/architectural space, but also the general public?

All year long we do proposals for work, some are asked for and some we invent.  Our mosaic work is very colorful and artisanal, adding liveliness to the places we impact.  The public response to our work has been extremely positive since we make beautiful what otherwise would be bland spaces.  People enjoy beauty and that’s what we bring to the public – other than context – which sometimes is educational or historic.

Understanding the close relationship between your works and the people: what do you consider have been the changes or impacts caused by CERO’s intervention in the site?

Most people don’t know mosaic works of art so we have educated the public as to these works of art that sometimes stand in the most random places in the city. Most people think of art as something inside museums but with public art, the general public is exposed to the art in the streets, giving them a sense of ownership and beautifying their surroundings.

With initiatives like the mural at the Central Library of the UNAM – Juan O ‘Gorman – , where the skin of the building is presented as a canvas, how does the CERO define the architectural  design process in a multidisciplinary perspective?

We both studied architecture so our design process for everything we do is architecturally informed.  We start with conversations of ideas, go onto sketches, then hard line drawings, then construction.  Clients always have a say in the process, so do architects and engineers that we work hand in hand with, so we try to adjust, comply and please all parts to make our work more meaningful.

Do you consider the CERO’s work to be defined as architecture?

It is architecture since it is mostly done on walls of existing buildings and makes the experience of these places more exciting and appealing.  It depends on the given definition of architecture but yes; we consider our work to be very architectural. 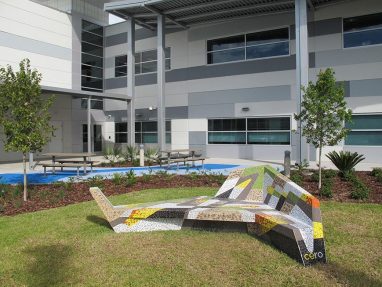 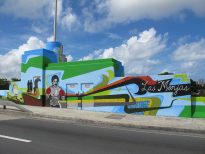 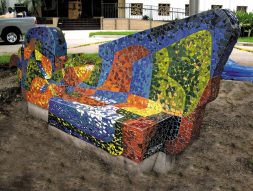 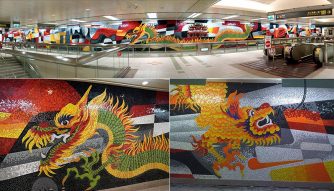 Which project do you consider to be the one that made many cities of Puerto Rico entrust you to work in their urban spaces, like Carolina?

The monument Negros Con Alas in Caguas showed potential clients our ability to build grand sculptures in concrete and, since it deals with historical figures, it also showed the cities that these works of art can teach citizens their history, as well as, educate them in artistic techniques.

Which work has been the greatest satisfaction given to the studio and why?

Echoes of Ages a 2,000 sq. ft. mosaic art work has been our greatest achievement given the fact that is was an international competition and that we traveled with 7 crew members to Taiwan for 4 months to build it. It was a really an amazing experience for CERO.

How would you explain the experience of finishing college, and getting reunited, and to create that unusual studio? How did the idea of the use of mosaic come to be?

We met at SCIARC; Los Angeles, CA.  We both had similar interests in art and architecture working together is school projects.  Our first big commission was a façade remodeling in Carolina and we randomly decided to make a mosaic  – a lo Gaudi –  for people to respect as art a really bad looking structure.  It worked out brilliantly and from then on we have worked non-stop on the mosaic art that has become our signature style.