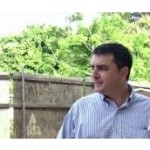 What was the main idea or concept for the new General Studies building?
During the General Studies Expansion design process we established three CLEAR PRIORITIES that served as conceptual generators:

Why was it important to develop a building with open floor plan that focuses in “transition” and “circulation” spaces?
In terms of spatial sequence and circulation, the Rio Piedras Campus was a very compelling precedent for the design of this building since the generous public spaces of the campus allow for multiple circulation alternatives. We realized that these spaces are as important as classrooms and offices. As in urban areas, the open spaces of the Rio Piedras Campus allow casual encounters and human interaction to take place, furthermore, these areas foster planned or spontaneous events such as classes, meetings or performances as you might see in a city. The idea of maintaining column free spaces follows the same concept as the Marrero Navarro Building (existing General Studies structure) where there is a 54 foot span between supports.

Where did the idea of using brise-soleil emerge?
The opportunity to establish a presence on the eastern entrance to the campus led us to the idea of integrating art into the façade; following a tradition established at other Universities like UNAM in Mexico. We had previously used a perforated aluminum sunscreen or brise-soleil on another project; this time we decided to base the screen design on a pattern derived from a fence we had designed earlier for Aula Verde, a community project nearby.

How was it to work with 2 New York based firms – Field Operations (landscape master plan) and Nadya Collazo (façade artist) – for the development of the building?
Field Operations did the conceptual landscape design for the proposed new quadrangle, we developed the design, but unfortunately it has yet to be built. Hopefully, when the Marrero Navarro Building renovations are resumed this will be included. Working with Jim Corner and the Field Operations team was very rewarding, not only due the professional caliber of the group, but also because we were exposed to a different way of approaching a project that turned out to be very productive.

I was familiar with Nayda’s work and, when we began to design the sunscreen, I thought of her immediately because her work seemed very compatible with what we were trying to achieve. She was living in New York at the time and I visited her studio in the Bowery to meet her and discuss preliminary ideas. From that meeting, I became convinced she was the right person to collaborate with us. We have since developed a good friendship.

Why on the website you describe the sunscreen as a “grand” relief?
It is a” grand” relief work – not in the traditional sense – but because of its monumental size.

What served as precedent for the new General Studies Annex?
The Marrero Navarro building (existing General Studies building) and, obviously, one has a “hard drive” full of experiences, images and spaces that inform any project.

How was the process of working together with the University?
It was a long process – many meetings, many faculty interviews – but very productive. It allowed me to get to know the user very well. We had all the support from the School and of course the UPR Central Administration.

As an architect, have you been influenced by any architect?
Yes, of course, above all my father – besides the genes – he instilled in us a strong work ethic and dedication. In my case, he planted the seed of a calling that continues to grow.

I have also been influenced by many others. My first visit to the Alhambra had a great impact on me. I remember wondering why this had not been part of my undergraduate architecture curriculum in the US. Labrouste’s libraries really caught my attention while I studied my master’s degree. The obvious ones like Corbu and Mies are present. Kahn was a great influence, not only because I studied at Penn with his disciples, but because his work touches me deeply. Moneo is another one I admire profoundly as I do Souto de Moura and Mendes da Rocha. I also very much respect the recent work coming out of Chile and Colombia. 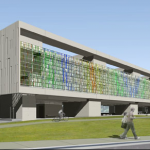 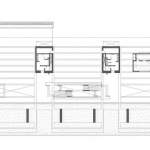 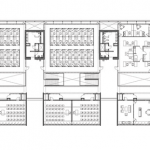 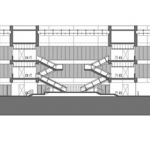 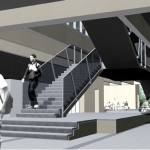 TOS[er] Reaction: Given our island condition – meaning that we don’t connect literally with any country – it’s really important to maintain contact virtually. In this case, they work with 2 mainland design studios; one developed a new framework for our campus and the other helped establish our new look. The concept of creating a new look for the back entrance to the campus gives it an equally important role as that of the front facade. The architecture language persuades you to enter underneath the building that emerges and levitates. Its color, flexibility and openness, integrates effectively with the context. The building takes you from one level to another and to other campus buildings as well. Another thing that they take into consideration when creating the building is acknowledging our environment, materials and culture; they understand them as a whole. To develop an important building like this one you have to know how our campus works. The plan that created the University of Puerto Rico’s campus took into consideration how the students interact with each other and how all faculties should connect. The Annex serves as an intersection of many circulations within the building and throughout the campus in general. Observing how people meet in the different spaces of the building is a moving experience that occurs in a beautiful context; you see the different academic communities sharing one space. Everyone, at one point or another, should walk, sit and observe how one space connects many different people. That’s really how the university [universal] really works.