About In search of an Architectural Identity in a Colonial Territory:

Osvaldo Santiago understands that the relationship between identity and ornamentation is a fundamental tool in defining a group of people. In his quest to understand the production of an architectural identity, he poses two key concerns:

The research leads to a proposal of a new General Archive for Puerto Rico. The existing archive is in a building that has severe infrastructure problems that has caused damage to some of the archival collections. This is due, in part, to the fact that the masonry building was not designed for this particular use when it was constructed in 1877 under the Spanish regime. The unique content of an archive resonates with the relation between identity, culture, and ornament that this investigation explores.

The General Archive stores the documentation of our national identity and this new site establishes a presence highly visible as one enters the emblematic city of Old San Juan. The proposal involves 3 main buildings: the archive’s collection, the auditorium, and the library. The three volumes define a dynamic and green public space that functions as a link between the existing Presidents’ Promenade and the Puerta de Tierra Promenade. The proposed archive revitalizes the existing site by replacing an unwelcoming asphalted realm with green spaces, linking and establishing a dialogue between the context and the proposed buildings.

For the research phase, Osvaldo Santiago selected 100 examples of what is recognized as typical island ornamentation including hydraulic tiles, ornamental blocks, and ironwork. The ornaments analysis focuses on positive and negative patterns that are synthesized into five (5) ceramic pieces that can be combined to create new compositions.

Once the research was completed, given that the existing archive is in Puerta de Tierra, the proposal was developed in a nearby location.  Seeking to provide greater continuity in the urban/physical context, Santiago proposes the reorganization of the adjacent structures by:

A relevant issue that Santiago approaches is the need for the relocation of the existing General Archive of Puerto Rico. The poor and rapidly deteriorating conditions of the existing building threatens the collection with a steady loss of important historical documents. Therefore, the island stands to lose a fundamental part of its history. Santiago’s investigation intertwines ornamentation & identity with our General Archive, this is mostly visible with its terracotta texture which accentuates the archive within its context and therefore the importance of OUR history. The main takeaway from this investigation, personally, was the variety of design strategies that Santiago integrated in the development of his design. From ornament studies and historical investigation to identity representation and urban design, Santiago creates a safe home for our historical documents and a new green space for the people in San Juan. 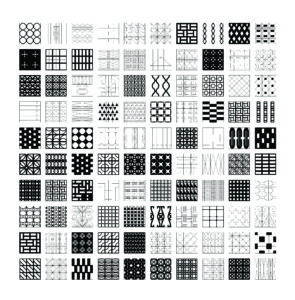 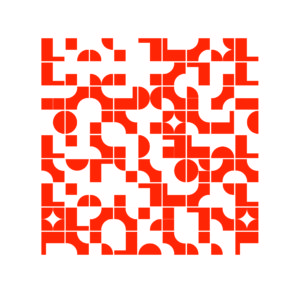 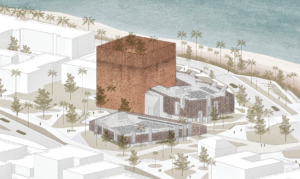 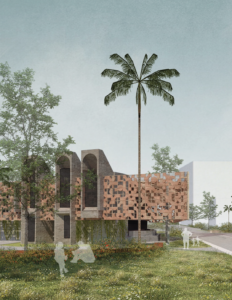 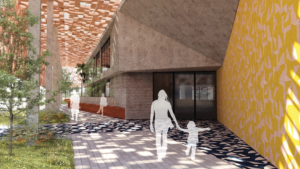 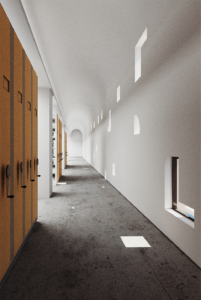 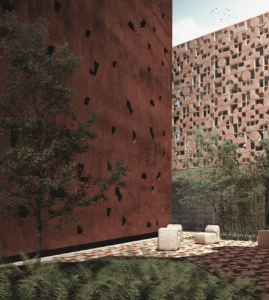 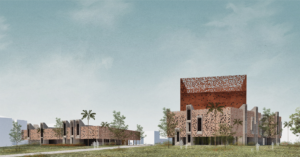