Marvin’s game:
This project has given me the opportunity to have a more profound knowledge of the sport I thought I already knew. It was really interesting to study the relationships between the pastime and the architecture that shelters it. In this proposal, cockfights give way to the building as the main attraction. Inside the arena the architecture works with the human and avian scale making the space a unique experience.

Having the chance to convert a vernacular type of architecture into a tourist Center opens new and interesting possibilities. In Puerto Rico cockfights are more than a pastime they are rooted in tradition. I believe that the way to preserve this tradition is through architecture itself by embracing the typology of the cockfight arena, giving it a richer program, opening the building to invite people into the activities inside, while, looking to the past and understanding its origins.

About the cockfight typology:
Documentation of cockfights in Puerto Rico had existed since the first history book of the island. In the book, written by Fray Iñigo Abbad y Lasierra – Historia geográfica, civil y natural de la isla de San Juan Bautista de Puerto Rico – in 1788, talks about the sport of cockfights and how they were practiced in Puerto Rico. During this time, the fights use to take place in the plazas while spectators, some on their feet and others kneeling down, made their bets. The tradition was brought from Spain in the XVI century, and regulation of the sport had existed since 1770.

After the invasion of the United States of Puerto Rico (1898), cockfights became illegal, but the sport was not that easy to eradicate. The sport continued to be practiced illegally in the Puerto Rican countryside as it was never really forbidden. Police would pursue the cockfights but, more often than not, they were inclined to ignore them because of all the important people that attended them. In Puerto Rico, unlike many parts of the world, the pastime brings people together of all generations and social classes.

It wasn’t until 1933 that the sport was legalized again by a governor imposed by the United States, Robert H. Gore. A governor originally from the South of the United States, a region known for practicing cockfights illegally as well. Definitely, a man with an understanding of the passion towards the sport. The new law was written by the legislator Rafael Martinez Nadal, a man who loved the sport and owner of many gamecocks. Once the project became law, and cockfight arenas where built, Martinez Nadal himself became an owner of a cockfight arena. Since then, the sport exists under the jurisdiction of the Sports and Recreation Commission.

From very early on, cockfight arenas were commonly represented in plan by a circular seating inscribed in a square. Traditionally, all support spaces are distributed in the interstitial spaces between the circular seating and the square envelope. Over time, new regulations and needs have instigated change in the required spaces of a cockfight arena.

Today, cockfights are practiced legally in Puerto Rico and the tradition has become a highly regulated sport and serves as a model for many countries in Latin America that practice cockfights. The cockfight arenas in Puerto Rico represent an important source of economical income and generate numerous direct and indirect jobs.

In Puerto Rico, the bond between cockfights and the cockfight arena is very strong. If it is ever prohibited again, there is no doubt in my mind that we would continue to practice clandestine cockfights in remote places embedded in vernacular buildings. 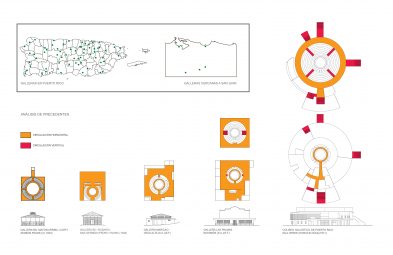 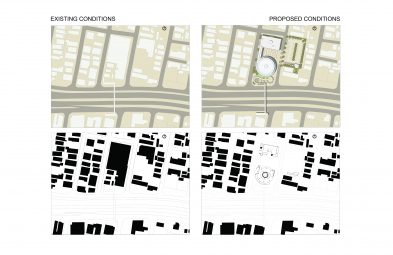 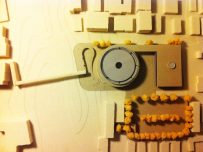 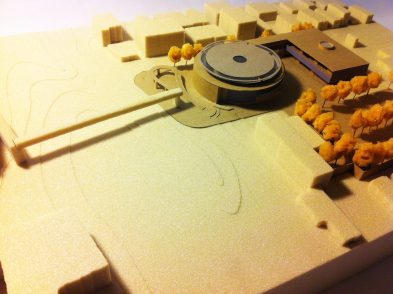