Documenting and integrating diverse acoustics experiences into the design of a soundscape park in San Juan.

A talk with Karla: “Through the design of a soundscape park, the listener is exposed to diverse acoustic experiences generated in actual time to heighten the true meaning of the city.” The 20th century was characterized by a population and development increase caused by rapid growth of industries, dwellings, and businesses. These tecnological sounds were integrated with the existing natural sounds and therefor with the human voice creating an interesting acoustic environment called “the soundscape” originated by Murray Schafer “The world is changing the acoustic environment all the time”. “A world without sound, is a world without perception. In every culture there’s a need to identify those sounds that surround and enhance the social encounter of the place. Every sound becomes a symbol this process allows the recognition of the true meaning and value of the elements that surround us”.

The notion of soundscape, implemented by M. Schaffer, is the collectivity of sounds of a place. “Listening is part of space development, as a means to investigate and delve into the theme of the soundscape – originated by Murray Schafer – it is vital to hear the main elements of a context, spreading and enhancing the real features favored by distinctive phenomena, events and signals.” With this in mind, Altieri proposes and develops the first sound park in San Juan. This park is situated in the Escambrón area.

The purpose of this proposal is to incite the perception of different auditory experiences that integrate natural and non-natural soundscapes of the immediate context. Emphasis is placed on enhancing the autochthonous sounds of Puerto Rico to allow for each listener to react and become awareness. “The sequence of the soundscape park dictates the high intensity of every acoustic experience, minimizing gradually until it’s finalizes with a non-audial sensation. Every space is articulated to intensify each particular soundscape without excessive overlapping of one with another. Every acoustic encounter represents the extension of this magnificent phenomenon.” 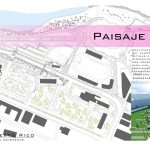 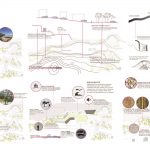 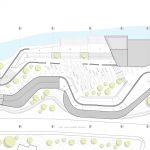 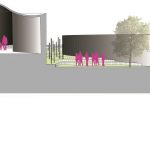 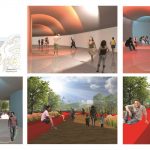 TOS[er] Reaction: This work shows the importance of preserving local sounds as part of the culture of a community. It emphasizes the importance of listening to architecture as a means of generating spatial experience. The sound park is presented as an integration of sound art into an urban typology that allows the appropriation of the space by the user. The proximity to the Escambrón beach enhances the experience. It is critical that sounds work as a material within architectural projects to enrich the experience and perception of places. With this said, tha park becomes a significant contribution to the public spaces of the Island creaty sound awareness in general. This project markets the importance of using sound as a design/architectural element and criteria. Karla Torres has proactively assumed the role of educating the School‘s community as to the importance of sound in the signification of space.